The team at The Global Gazette received one of Arts Everywhere’s Student Arts Innovation Grants in April 2022. Their project is a campus publication that spotlights experiences and understandings of globalization, and promotes various modalities of knowing and expression. The Global Gazette publishes both artistic and academic works, including research papers and projects, as well as photography, videography, music, and visual art. Read more below to learn about the project, their first issue, and what’s on the horizon for the publication!

The Global Gazette began out of the concern that strict limitations associated with academic publications hinder students who are curious about publishing their work. The founding members of The Global Gazette decided to tackle this issue, and they worked to make publishing more accessible to anyone wishing to submit a piece of work. The team wrote, “the merging of academic and creative forms of expression in our journal was an important element of engaging with multiple ways of knowing and perceiving ‘the global.’” They also felt that such a platform could help “transcend the binaries between formal academic writing and other forms of creative expression.”

After establishing their mission and receiving the Student Arts Innovation Grant from Arts Everywhere, the team was able to create a digital presence, support recruitment, plan a Spring Symposium event for Spring 2023, and provide team members with stipends as a token of gratitude for their hard work. The groundwork was laid so they got to work on putting together their first edition.

That was the word that The Global Gazette team used to describe their first edition. Showcasing a diverse series of submissions, including paintings, photography, poetry, research essays, personal reflections, and a documentary, the team loved the variety of mediums that were featured. With such an assortment of mediums represented, they are excited at the prospect of continuing to publish all of these different forms in future issues, noting that they are “always open to additional suggestions for other media” as well!

Putting together the issue did not come without its challenges though. The inaugural issue of The Global Gazette was produced just a few months after the founding of the journal. At that time, the team only consisted of four members, two of whom were busy preparing for graduation at the same time. Plus submissions were flowing in during a particularly busy time in the semester. 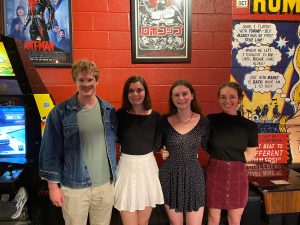 In addition to the workload, the team had to answer and define many aspects of the publication process. What were their standards for publication? How did they want to format the first issue? How do you even make and edit a website?

There was also the issue of the publication’s title. The original name of the journal was slated to be The Globalist, but they soon learned that that had polarizing political connotations. They were unsure if changing the name would give into its negative implications, or if keeping it would risk alienating people. Ultimately, the group changed the name to its current one: The Global Gazette, which they believed would, “showcase the great work of UNC students and support them in their journeys as published writers, artists and thinkers.”

Fortunately, The Global Gazette team was able to overcome these challenges and has been thrilled by the sheer groundswell of enthusiasm and interest, even in its very brief existence. The team said,“from the moment we began to solicit submissions, we were blown away by the quality and passion, as well as the diverse and coherent interpretations of ‘the global’.”

Since the start of the Fall 2022 semester, the producing team are proud to have expanded The Global Gazette to an interdisciplinary 8-person team of editors, treasurer, and digital media specialist, led by co-presidents and founding members Eleni Econopouly and Scarlett Hawkins.

They are also thrilled that due to the linguistic diversity of their team members, they are now able to accept submissions in Arabic, Spanish, and German.

In Spring 2023, the group will host a Spring Symposium where they hope to promote The Global Gazette to new audiences, invite contributors to showcase their work, and support fundraising to support the journal’s sustainability through the sale of merchandise and other incentives. They hope that the solid foundation that they have built will “enable the journal’s progress and continue to provide a platform for UNC students’ creative and academic achievements for years to come.”