One of Arts Everywhere’s main goals – and greatest joys – is supporting people’s projects and passion for the arts. We hope to be a source of support eliminating the monetary barriers that students might face in realizing their artistic vision.

In the spring of 2019, Arts Everywhere launched the Student Arts Innovation Grant, awarded once a year to one undergraduate and one graduate student to create a work of art. Undergraduate student Barron Northrup (’20) was one of the inaugural recipients.

The Inspiration
When Northrup is struggling creatively, he looks for stories which he is uniquely situated to tell. To find the narrative, Northrup says he asks himself the question “in this moment, where is the photo which only I can make?” For his project, the answer was quite simple. Being active in both the visual and musical artistic fields, he saw the opportunity for these two worlds to interact further on campus and set out on his new project: Joining Forces: Unity in Art and the Orchestra.

His Connection to Photography 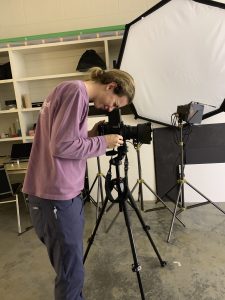 Northrup applied to UNC as an art major as visual art was – and still is – his primary interest. Last fall, he signed up for a Darkroom Photography class (ARTS 305) with Professor Gesche Würfel where he got his first taste of medium and large format film photography. Very quickly, that became one of his favorites and he asked Professor Würfel to be his faculty advisor for the project.

However, his first photography experience at UNC didn’t come from a class he took but from an extracurricular experience two years prior when he joined The Daily Tar Heel during his very first semester at UNC. This opportunity introduced him to documentary photography and which inspired him to take several photojournalism classes. The classes and his DTH work have all involved portraiture, and Northrup says they have become “one of my favorite applications of photography.”

His connection to the UNC Symphony Orchestra (UNCSO)
As an audiovisual technician in the Department of Music, Northrup has recorded the UNC Symphony Orchestra’s concerts for several years. However, the orchestra truly captured his imagination when he took a class in orchestral composition. The main project for the class was to compose a short piece, which was then performed by UNCSO at the end of the semester.

Spending time at UNCSO’s rehearsals and immersing himself in the writing process forced him to think about the orchestra’s idiosyncrasy: orchestras blend a large and diverse array of instruments and musicians.

He realized this contrast between individuality and unity holds true across the arts: music and visual art take vastly different forms and are presented in disparate ways, but they nevertheless complement each other in artistic expression.

Bringing it all together: The project 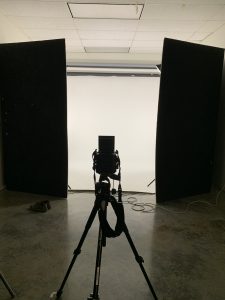 Northrup believes that classical orchestras and film photography – especially larger format photography – are both “incredibly expressive and complex art forms that are declining in appreciation, popularity, and funding due to the rise of newer musical and photographic trends.” He aims to show that both art forms remain very much alive.

For the project, Northrup used medium format film to produce color negative film photographs of each member of the UNCSO. The photographs themselves posed little technical challenge. He used the same studio setup for all of them, so once he had his lighting worked out, the process sailed smoothly.

What proved the most difficult for Northrup was coordinating portrait sessions for all 85 students (and their instruments) and figuring out how to photograph the piano! Since the student was unable to move the piano into the lighting studio, Northrup was forced to adjust and create a miniature studio in the back hallway of Moeser Auditorium. Despite those challenges, he has loved engaging with representatives from different areas of the school related to the production of this exhibit. 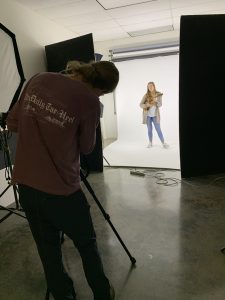 “I hope people will begin to think about the potential connections between visual art and music when they see this work,” Barron reveals. “My goal with the placement and timing of the exhibition is specifically targeted toward creatives in both of these disciplines.”

The photos he took will be exhibited together and arranged, according to the artist, in the configuration of a “bird’s-eye view” orchestra diagram. They will go on display at the Hanes Art Center starting the week of November 18th. On December 3rd, he will move the photos to the rotunda of Hill Hall as a pop-up gallery to coincide with UNCSO’s concert that evening. The photos will remain in the Hill Hall rotunda through the end of December.

But Northrup clarifies that even for people who identify with neither of these fields, his goal is “to inspire them and to get them thinking about the interdisciplinary connections.” He believes that placing precise definitions on art is a risky business, but for him, the “whole purpose of art is to inspire, whether that means to express beauty or to provoke thought.” Northrup hopes that his art can be the fuel for others to tap into their own creative selves.

“I certainly hope the project will be beautiful, but more than that, I want it to be an example of unity across the arts.”