Welcome back to campus everyone! My name’s Madison and I’m a student coordinator for Arts Everywhere. With classes roaring up and campus events in full swing, it’s looking like fall semester will be jam-packed with excitement (And hopefully a snow day or too). They say by your junior year you start to get the hang of things in college and I sincerely hope they’re right. By the look of things, I think I might be the exception… 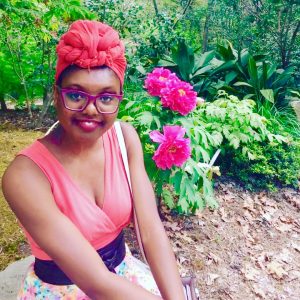 My summer this year was adventurous. Since spring semester of sophomore year–well, let me be honest–since my first year at Carolina, I’d been itching to travel abroad. As a German major, I dreamed of visiting the home of Volkswagen and BMW, wanting to put some actual perspective into learning the German language and culture. For a while, I wasn’t sure how I would do it, but thanks to UNC Study Abroad, I got the chance to study in Berlin for eight weeks. At the news, I was ecstatic…and scared if I’m being honest. I’d never actually traveled like THAT by MYSELF before. Sure, I traveled to the beach alone, to another state or three. That was easy, no problem. But a whole other country with a whole other language? Needless to say, I might have freaked out a little.

I arrived in Berlin on a sunny, slightly chilly May day, feeling not so ready to tackle the “big city.” While North Carolina time had just barely struck midnight, Germany was well into their very bright, very wild Thursday morning. My hand gripping my suitcase trembled just a little (okay maybe a lot). My face must have given away my uncertainty because the elderly grandma I sat next to on the flight kept giving me concerned glances and asking, “You okay, honey? Do you need any help?” After reassuring her I was all right for the third time, I steeled my shoulders and slipped outside. As I walked down the sidewalk, heading to what I thought was my host mom’s car (I was praying it was), the world braked and I, slowly but surely, descended into Berlin’s magical pulse.

So firstly, Berlin, it seems, is a city all about breaking boundaries and challenging antiquated norms. There’s graffiti everywhere and a fascinating story behind each piece. On the Oberbaum Bridge in Kreuzberg, I looked up one day to discover a tiny cork figurine resting in the bridge rafters. My friend explained the figure was by no means placed randomly. A Berliner yoga instructor, Josef Foos, also known as, “Street Yogi,” creates tiny cork figurines in various Hath yoga positions and perches them atop street-signs or out-of-reach places in Berlin. Foos intends the figurines to bring the peace and balance of yoga practice into the manic bustle of Berlin, purposely placing them in spots where city-passers can easily set down their mats and stretch. After discovering this, I made a point of trying to find more street yogis, finding yet another one perched on the street-sign outside of my German university.

Just down the street from that little cork guy lies Blu’s ‘The Pink Man.’ (picture below). 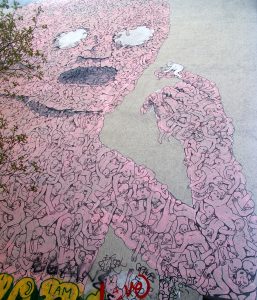 One thing you have to know about Blu is that he’s the creator of some of the most famous graffiti works in Berlin. He’s also a serious rebel. He actually blacked out some of his renowned graffiti to protest against the gentrification and displacement happening to the district’s occupants. Now, if you try and see his work, all that remains are black walls–a lasting outcry against the removal of people from their homes. I found this piece, ‘The Pink Man,’ after downing some of the best Italian gelato I’ve ever had in my life from a street vendor. My first reaction to the scene came out as What? and then, Oh wow. The graffiti piece speaks to a debate of who controls the power in a community or government, featuring, “A building-sized monster made up of hundreds of tiny, naked humans clinging to one another in fear,” (Culture Trip). For me, it seemed this piece offered an explanation for the mindless way groups and communities can follow negative influences out of fear, and, inadvertently, end up destroying their own freedom in the process.

There were a couple of things I knew I had to do when I went to Berlin. Near the top of my list, probably after seeing the Berlin Wall, was to attend an opera. Two good friends and I decided to attend Carmen, which, in my opinion, is probably one of the most classic operas out there. That was…an experience. Apparently, they changed the plot a little bit to add a more contemporary vibe, having the villains illegally harvest organs instead of smuggling tobacco…? Yeah… Needless to say, I might have been just a little bit (a lot) confused. Plus, it was all in French, though we did have English subtitles (on a screen way, way out of one’s eyeline). Despite all the cultural differences (and plot changes), the opera will still stand in my mind as one of the best I’ve ever seen.

The opening shot itself was unforgettable. The Deutsche Oper had a circular stage that could spin, and in the center of it, on a raised chair, spun a gorgeous woman clad in a flowing, bold crimson gown. The orchestra swelled ominously and the stage turned excruciatingly slow as Carmen languidly puffed a cigar, her eyes bright with cunning. Hazy smoke floated up to the ceiling where a massive bull hung down from the rafters, swinging just above her head. (Apparently, this was symbolic to events in the opera. And don’t worry, it wasn’t a real bull). When she laughed, the sound so arrogant and at the same time arresting, I forgot I was watching an opera and not real life. Honestly, it was wild. The performances were absolutely brilliant and at the end, I walked out with my head spinning. Every time I try to describe that opening scene, words can’t seem to do it justice. But if you’re ever in Berlin, you have to go and see it, I promise you won’t regret it.

And by this point in this blog-post, I’m positively sure I talked your head off about Berlin. Thank you so much for getting to know me somewhat and listening to me rant about my Berlin trip (haha). I look forward to talking with you guys more in future blog posts and hopefully also getting to meet you too at all the wonderful programs we’re planning this year! See you later alligator!