The heatwave that we felt in July was complemented by a wave of invigorating creative opportunities and ventures. While things in Chapel Hill slow down over the summer as thousands of students escape to summer vacations and activities, there were still plenty of exciting events on and around campus. For us at Arts Everywhere, the heat didn’t slow us down as we took the town and campus by storm with projects like Studio 109 and partnerships with Start Strong and Project Uplift. 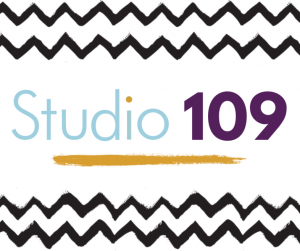 downtown Chapel Hill. Partnered with the Town of Chapel Hill’s Division of Community Arts & Culture, The Chapel Hill Downtown Partners, and the Orange County Arts Commission, we selected four local artists (Charlie Dupee, Paul Estrada, Ayla Gizlice, and Heather Lewis) who were each given a stipend and access to the studio space for the summer. In return, the artists-in-residence held open studio hours which allowed visitors to come in and observe the artists at work. In addition, each artist facilitated two workshops on subjects of their choice. These topics ranged from a kudzu cooking class, paper mache animals, the process of grieving, and paint and resin. 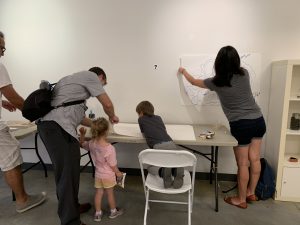 With the studio located on Franklin Street, as people walk by to go to lunch or grab coffee, they might see our sign outside of Studio 109 inviting them to come in. Sure, there were couches at the front to hang out and pretty good AC, so that could have been a draw, but it was amazing to watch visitors come in and explore the open studio. On one of the open studio nights, a family walked in, grabbed some snacks, and started looking around. Perhaps inspired by the artwork around them, the two young children asked for some paper and pencils and began creating their own piece of art. Their creation turned out to be some combination of an alien and unicorn (according to them), and one of our artists-in-residence deemed the piece worthy enough to hang up on the wall for the evening. 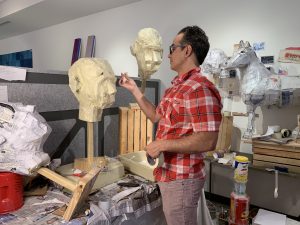 creating an art installation or exhibit. The open studio space gave people an opportunity (if they felt bold enough to walk in) to explore and become more informed. For the artists, it also provided them an opportunity, not only to connect with people but to understand themselves better. Artist-in-residence, Paul Estrada (local art teacher at Chapel Hill High School), said this about his experience with the open studio hours, “Probably my best takeaway was having to talk to four to ten people a day about what I do. So it like refined and I kind of got to grow and observe what I really am into”.

While all this was happening at Studio 109, we were also partnering with UNC Start Strong, a program run through Carolina Mxle Scholars. Start Strong brings incoming underrepresented men, first-generation students, Carolina Covenant Scholars, and select student-athletes to the University. As part of their experience, Arts Everywhere offered different presentations/workshops to show them how art can be life-changing. 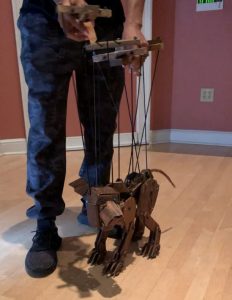 Our first guest in July was Tarish Pipkins, more famously known as Jeghetto. During his presentation, students learned that he had delved into hip hop, art, poetry, and was even a barber before making his way to the puppetry industry. Since becoming involved in puppetry, he has used his puppets as a way to tackle issues from the history of racism in America to helping children with special needs. And of course, his puppets are always a delight to watch.

As Jeghetto walked around with his puppet, Blue the dog, students were enthralled by the mechanics and the artistry behind something as seemingly simple as a tail wag. More importantly, they saw how his life was transformed by the arts and perhaps how their lives can be impacted by the arts as well.

Our second guest was Emanuel Brown who led a workshop entitled New Mas(k)ulinities. The workshop featured a film he made with Joie Lou Shakur tackling topics of vulnerability, masculinity, and patriarchy.

As the students filed into Gerrard Hall, they were paired so that they were sitting face to 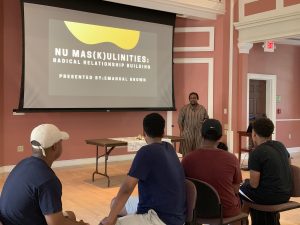 face with their partner. Emanuel led discussion-based exercises that encouraged the students to get to know each other more deeply. In the beginning, it was unclear how these young men would react to these vulnerable exercises. As the workshop progressed, more and more young men started speaking up, offering their thoughts and reactions, and asking questions.  Finally, at the end of the workshop, each young man stood up, one by one, and defined what their “Nu masculinity” feels like, tastes like, sounds like, and smells like. It was a powerful way to end an important conversation.

Finally, a fun event we hosted this July was in conjunction with the Uplift Plus program (which is run through the University Office of Diversity and Inclusion). This is an intensive 5-week academic enrichment and college readiness program for high school students. As part of their experience, they came to Morrison Art Studio, a groundbreaking 24/7 studio that provides students, staff, and faculty a space to create and all the supplies you could need to see your imagination come to life. 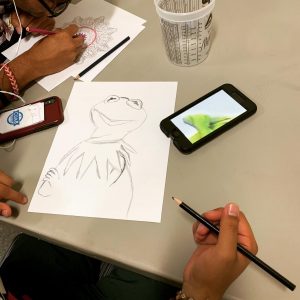 At first, these young adults seemed a bit cautious and unsure. It was as if they were thinking, how could we possibly spend two hours here…coloring and painting?  However, after a few minutes of getting acquainted with the space, they pulled out their phones for some inspiration, turned on some tunes, and began to relax. The result was an explosion of creativity. 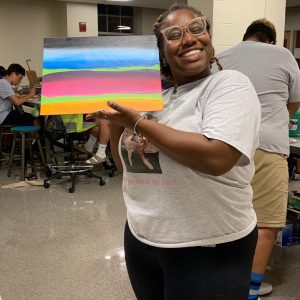 Some of the students didn’t want to create their own piece of art from scratch. They started with colored pencils and adult coloring books which seemed to be a safe and easy route to success. As the night went on, the same students who were coloring in those preset templates, started delving in deeper. Watching their friends around them painting and playing with tape, they too, felt confident enough to invest a little more of themselves into the experience. Two and a half hours later, as the students responsibly cleaned up their stations, there were whispers of how quickly time flew by and pictures being taken as they proudly showed off their artistic accomplishment.

At Arts Everywhere, we believe that the arts are for everyone and with our partners, we look to create spaces and opportunities for all art, performing, visual, or literary.

So be courageous. Sign up for a workshop. Go to a concert. Watch a play. Pick up a paintbrush. Who knows…it might end up changing your life.