In this monthly concert series created by Arts Everywhere and the Department of Music in the fall of 2019, First Fridays gives students and student chamber ensembles an opportunity to perform and share their music with the community. Originally set in the rotunda of Hill Hall on the first Fridays of the month and then going on the road to different spaces across campus, these informal pop-up concerts have allowed students, faculty, staff, and community members to come and go as they listen to live music of all genres and configurations.

In keeping with the efforts made in Fall 2020 to keep the community safe and healthy, First Fridays will continue to premiere online this Spring! Once again, Arts Everywhere and the Department of Music sought and carefully selected proposals for virtual, pre-recorded 15-30 minute programs featuring music by underrepresented voices (BIPOC, LGBTQIA+, women, etc.).

For Spring 2021, we are pleased to announce the following featured performances below! Selected students researched and chose pieces by underrepresented composers who were meaningful to them and will present the pieces along with program notes about the musical works, composers, poets, and historical context.

Please join us on Facebook on the first Friday of each month to listen to and support these talented musicians!

Songs and Lieder by Robert Owens 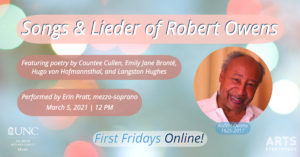 I. The Old Stoic

II. Tell me, tell me 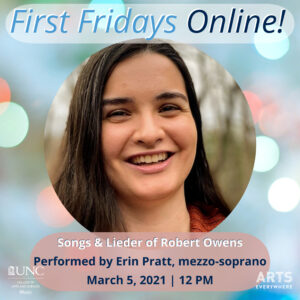 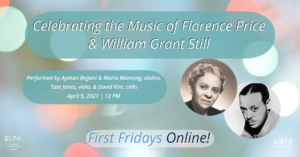 I. Mother and Child 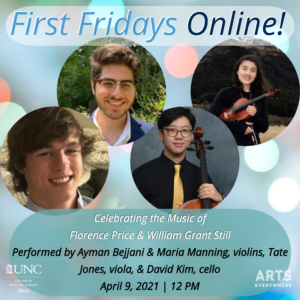 Read more about First Fridays and watch all of the the 2020-2021 First Friday performances on YouTube.