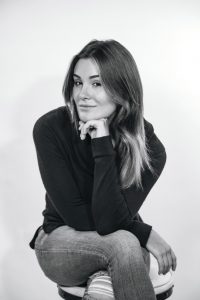 MS: How and when did you decide to start writing Off the Record? What served as your inspiration?

JQ: I played around with a few ideas before I eventually landed on the title Off The Record. Most authors write first and then pick a title, but I actually had the title and drew the cover design before I knew the whole plot. Essentially, I mashed together the three things I know the most about: Washington, D.C., rock and roll, and politics. My mom was born in raised in Washington, and her grandfather was Senator Mike Monroney, a Democrat from Oklahoma. I come from a long line of Washingtonian women. Liz Mason, the main character, has the personality and family history of my mother, and the journalistic aspirations of myself. I actually worked at Millies, the surf and turf bar where Liz bartends, at the end of high school and the summer after my freshman year, so I was able to recreate Millies for Off The Record, and it served as a place where Liz could grieve and feel at home after her mother’s death.

In terms of plot, Liz’s mother has passed away from ovarian cancer, and she gets a job as an investigative journalist because of her family connections. Her grandfather was a famous broadcast journalist from Oklahoma. At the end of my freshman year at UNC, my mother was diagnosed with stage four ovarian cancer and endured many surgeries and chemo. I wrote that into Off The Record because it’s what I know, and it makes Liz a relatable and emotional person, which helps the reader to connect to her thoughts and actions.

Other than that, I had to research A LOT for the political aspect of the plot. Liz uncovers a scandal that involves the president and his agenda for a military budget reform bill. Aside from the way Washington works (in terms of a lot of favors happening between party members in this town) I had to research a lot about defense contracting and small details about different cabinet positions that I was not familiar with. As for the romantic relationship between Liz and Joe, that was based on my parents meeting in Washington 20 years ago.

MS: How did you balance writing and your position as a full-time student at UNC? Do you have any advice for budding authors attempting to balance work/studies and their writing?

Kidding. It took a lot of chai tea cartons from Target and sleepless nights. From around July to October I had a few writing benders where I was awake for longer than 24 hours. Luckily, a lot of my teachers as well as my publisher were all very understanding, and were lenient on certain deadlines if I requested an extension.

My advice would be that no matter what time it is or what you are doing, if you have a thought that relates to your work, make sure you write it down. I remember when I first started planning the plot for OTR, I would write and write and finally get in bed, and after 10 minutes I would think of an amazing conversation or specific dialogue that I liked and I would have to rip my covers off and get it on paper so that I wouldn’t forget. The best parts of my book definitely came when I least expected them. As for balancing school work, well, get a Starbucks card and good night eye serum.

MS: In the Daily Tar Heel article [linked below], it is mentioned that you were assisted by a professor from Georgetown – how did he and his program help your novel progress and would you recommend the program to other students?

JQ: Eric Koester, a professor from Georgetown and the founder of the Creator Institute, reached out to me in January of 2020 and asked if I would be interested in taking his course for young authors. It was a semester long course for the spring where he essentially teaches you how to write your first book like it’s your second book. He had a lot of guest speakers and taught specific ways to push through writers block and round out a good plot.

The goal was to have about 12,000 words by the end of the semester. Eric connected each author with New Degree Press, a relatively new self-publisher, and if they “green-lighted” your 12,000 words, you would get a contract with them to publish. After I was greenlighted, I worked with the New Degree Press, specifically my amazing editor Kristin Gustafson, and I was equipped with everything I learned from Eric’s course to see my book through.

I ABSOLUTELY recommend the program for any and all writers, any age and any genre. It is very hard to get a book published, any help you can get is recommended, and Eric’s course combined with New Degree Press will keep you inspired and motivated.

MS: What are your plans for the future (concerning either sequels to Off the Record or just future career/writing ventures in general)?

I hadn’t thought about writing a sequel when I first published, but I keep getting texts when people finish Off The Record like, “I need a second book!”, so there is definitely a possibility for a sequel. I now have a journal that is strictly for book ideas, titles, dialogue, plots, etc. I think that I have a few more books in me.

My dream growing up has always been to be the editor-in-chief of Rolling Stone. I would still jump at that chance in a heartbeat, but Off The Record has helped my horizons widen. I think that it would be incredible to write a book or a series that becomes a TV show.

MS: You also mentioned in the DTH article that you have written a good portion of Off the Record during the pandemic since you started writing in January 2020. How were you able to stay motivated and what would you recommend to writers facing difficulty writing during COVID-19?

JQ: This was the hardest part of the whole process. I was having a great time writing before COVID-19, when I could have conversations with so many people and get inspiration from everywhere, just from living life. But starting in March, I moved back home and was pretty isolated from inspiration of any kind, as I didn’t really leave the house.

One day, I realized that I didn’t have to stare at a blank word document waiting for ideas to come. I live in Washington, D.C., so I got in my car and I drove downtown. I picked the office building where Liz would work, and I drove from there to the White House so I could map out her commute. I did this for a few days here and there, and I was able to park outside of Café Milano, or Millies, or the Hay Adams Hotel, and imagine what Liz’s encounters would look like. It really helped me, and as for the political plot points, I watched A LOT of political TV series on Netflix. I sort of had to dig and search for my own inspiration, but I felt a lot less lonely and unmotivated every time I was able to write. Writing can be a really healthy and productive way to actually get yourself through a time like this, and you should stick to writing what you know at first.

MS: Tell us anything else you want us to include – publicity for the book, an excerpt, a link to the bookseller, or just a fun fact!

Off The Record has something for everyone. I’m serious when I say that I have had guys and girls from every age group reach out to me to say they loved it. At its core it’s a political fiction novel, with a little rock and roll and romance here and there. But Liz also deals with the very real feelings of losing a parent, working two jobs, feeling like an outsider in her own town, and struggling to keep her life on track while trying to live her dream.

Here is a link to the Amazon page – I am always needing more reviews so drop one there if you have the time!