LC is the author of Shelter in Place, which received an honorable mention in our One Month of Solitude Writing Competition. 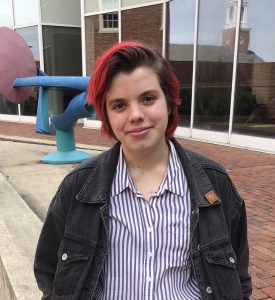 AE: “Shelter in Place” is a wonderful example of capturing the moment. Could you talk about the moment that inspired the poem?

LC: It was sometime after my classes for the day had ended online. For class, I sit in a desk beside my bedroom window, and was kind of absentmindedly gazing out of it when I saw the two cardinals in the poem hop out of the bushes onto the driveway. The sweetness of the two birds coupled with the loneliness of me stuck up in my room inside was an instant source of inspiration to write. I’ve seen them a couple times since then, and each time I’ve tried to see if they inspired any more poetry- but never like when I saw them sharing food when they first appeared.

AE: How long have you been writing poetry? How have you honed your craft? How has your writing changed?

LC: I’ve been writing poetry off and on for a while, I want to say since high school. But this past semester was the first time I actually took a poetry class, and felt like I really understood poems a lot more than I previously had. The class helped me gain a style and confidence in my writing that I didn’t know I was capable of!

AE: What are your favorite books and movies? Who are your literary role models?

LC: I think the first time I realized I actually enjoyed poetry was reading a collection of poems by seamus heaney in high school. As for general writing, Douglas Adams (Hitchhiker’s Guide to the Galaxy) and Neil Gaiman (Good omens, Neverwhere) are some of my favorite writers and have influenced my tone in my writing the most.

AE: What has been your favorite quarantine passtime?

LC: I’ve been playing a lot of Animal Crossing and drawing a ton!! I’ve been trying to do a little of everything- painting, sewing, cooking, even making jewelry! (I get bored very easily.)

AE: What is your advice to other young poets?

LC: Keep writing those 2am poems in your phone’s notes app! They may seem like garbage now, but they’re the reason you keep writing!!