Arts Everywhere teamed up with the UNC Center for Galapagos Studies (CGS) to call for proposals for sculptures in honor of the 10th anniversary of the Center for Galapagos Studies. Four NC artists were selected to create a piece of human-sized art (4-7 feet) with recycled and sustainable materials that represent and celebrate the wildlife of the Galapagos Islands. The installment of these sculptures began on Arts Everywhere Day on April 8, 2022 and these pieces of art can be found across UNC’s campus.

In addition to these four sculptures, Galápagan artist Isaac Delgado was commissioned to create a marine iguana sculpture outside the GSC research facility on San Cristóbal.

Learn more about the artists and the pieces below!

Galapagos tortoise by Nico Amortegui (Was outside of the Campus Y) 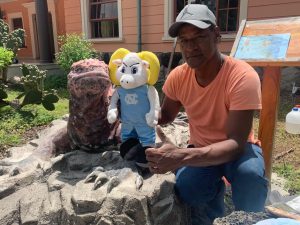 Read more about the project in UNC Research’s Endeavors article, On the Origin of Sculptures. Check out the Arts Everywhere Public Art Map to find the specific locations for the sculptures at UNC.