On the last day of class, a group of fourteen students, two auditors, and their teacher gathered in a circle — seated in swivel chairs with their laptops and energy drinks — to look at images projected on the board. They engaged in discussion and dialogue, each student confidently voicing their opinions and observations, sometimes with a tinge of cynicism. Heads nodded in agreement. Chuckles broke out. Hands waved and pointed emphatically as students made their points. 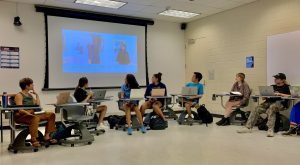 The class that elicited such engagement? ARTH 250: Objects, Museums, and Meanings.

For some students like Tomas Salazar, a rising junior and business major at UNC, this class was chosen out of convenience: it fulfilled several general education requirements. What he and others might not have counted on was an experience that would translate beyond the arts and strengthen their critical thinking.

From theory to practice: museum pedagogy in the classroom

Led by PhD student Brantly Moore, this five-week summer course grappled with contested notions of the museum: its purpose, its objects, and proper visitor etiquette.

The class explored objects and meaning in the context of museums and asked questions such as, “How does one ‘read’ an object?” or “What do works of art communicate on their own,” and “How do a series of decisions – made by individuals and institutions – shape how we understand them?”.

The course was originally conceived by Elizabeth Manekin, the head of university programs and academic projects at the Ackland Art Museum, and intended to be a Maymester course in London in 2020. Unfortunately, those plans to have the class learn about and immerse themselves in the museums of the city never came to fruition.

Two years later, the class was ready to be offered again, this time in Chapel Hill. Moore still wanted to provide an experience that would be similar to the cultural immersion that the students would have received in London. So in addition to assigning readings and bringing in guest lecturers, Moore gave her students the opportunity to observe the issues they were studying through museum visits in the Triangle.

Aemara Mathews, a sophomore art history major, said the “museum visits offered opportunities to put the ideas we discussed during class and which arose from our readings into practice.” For Mathews, getting to visit the Ackland after considering concepts in class provoked a new viewing experience in these institutions. The class field trips encouraged her to think more critically, “more like a scholar, than I had previously done when visiting museums.”

The museum excursions were also a pivotal part of the learning experience for Angela Nguyen. A rising senior majoring in religious studies, Nguyen reflected on her own experiences of discomfort when she attended museums in the past. With no art history knowledge, she felt as if she did not belong in the space. However the class visits gave her a safe space to explore and contemplate objects and their meanings.

“The ease of attending the museum as a unit, and collectively reviewing an object where we all could express our opinions, was profound,” Nguyen said.

When asked why the museum visits were such an important part in designing the course, Moore said she strongly believed in practice, not simply in theory.

“If I only had students reading critical theory of museums without stepping into the museum itself or without hearing the perspective of museum professionals about the actual considerations, limitations and opportunities, it wouldn’t have felt accurate or a full teaching experience,” Moore said.

Embracing that idea of a full experience for herself and her students, Moore took things one step further for the students’ final project.

After five weeks of studying objects and museums, hearing from guest speakers, and traversing museums in the Triangle, the last part of the class challenged the students to step into the curatorial role. For their final project, students were asked to create their own 5-8 object exhibition about a social justice or civil action issue close to their heart.

Moore came up with the idea for this final project with three goals in mind: to give students hands-on experience with curation, to utilize a platform that students were familiar with, and to tie it to something they are passionate about.

Incorporating social media — Instagram in particular — offered a way to speak the students’ language. Moore mused about her personal experiences and how she found the process of posting on Instagram to be quite similar to the process of curation.

“When I go on research trips, I’m often taking Instagram shots and composing these posts almost like exhibitions of my daily life for my friends and family,” she said.

With the seedling of an idea in place, the project parameters began to grow. Part of the discussion in class had been around the idea that “museums can intervene, or at least shed light on subjects in our daily lives.” She hoped that by adding the social justice component to the final project, students would be more invested and mindful of their choices.

With the final project and the course format somewhat an experiment, Moore was not sure how students would respond, but she had a hunch that an immersive, discussion-based experience would be meaningful to students regardless of their background.

Students of different majors came together for five weeks and dug deep into the discussions, questioning what they knew and bringing new perspectives to their experiences at the museum.

Salazar loved the discussion aspect of the course and enjoyed hearing the perspectives of his peers. He said the conversations allowed him and his classmates to “understand the context in which they viewed objects, recognize the weaknesses and strengths in their beliefs, and ultimately, create a more welcoming and in-depth environment for discussion for the students to flourish and express themselves.”

For other students like Mathews, the class and discussions forced her to further develop ideas that she already had about museums and objects. When asked to describe the class in one word, Mathews said, “provocative.”

Even if Salazar never studies art history again, he thought this general education class was enjoyable and served its purpose; “I think the idea of gen eds is to have this exact experience, considering things that you normally wouldn’t consider and understanding where you stand on a lot of issues and stuff in other areas, not just your major.”

This group of fourteen students, two auditors, and their teacher, came together from different disciplines for a five-week course to study, observe, and discuss museums and their objects. They leave now with gained knowledge and a shared experience that taught them to open their eyes and see the museum – and the world – with new perspectives.

The final projects can be viewed on Arts Everywhere’s website at https://artseverywhere.unc.edu/a-class-at-the-museum-final-projects/.